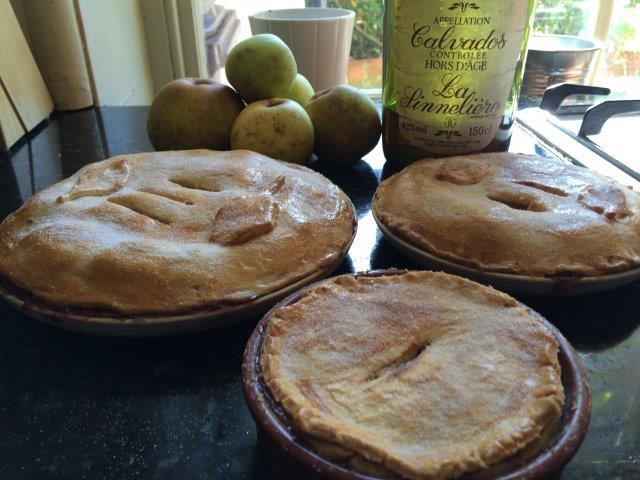 Keep away the Winter Blues with a little Apple Brandy

Mid-January and the end of year celebrations already seem like a distant memory. Winter weather is truly here and the first signs of Spring may still be a long way off, as we sit and look out at cold, grey skies or frosty, foggy mornings. The time of year when a little brandy may be a welcome guest at the dinner table, to raise your spirits and help you look forward to warmer days and longer evenings. The most popular worldwide is, of course, cognac, closely followed for those 'in the know', by Armagnac. Both of these are distilled from a base made from grapes, but another brandy which has a very wide following in France, is Calvados, which comes from apples rather than grapes.

The home of Calvados is Normandy and the best area is the Pays d'Auge. Up until the 18th and 19th centuries, it was little seen outside of the Normany region, but the devastation of the European vineyards by a bug called Phylloxera, gave it a huge boost, since apples were naturally not affected. It is distilled from cider and over 200 varieties of apple are authorised and still grown in the region. A bit like grapes, the different apples give a different character and flavour to the cider and thus to the resulting calvados distilled from it. Distillation can be either by the continuous still method, as used mainly in Armagnac, or by the pot still as used in cognac and for malt whisky. The jury is out as to which method gives the better quality, but having tasted calvados made by both methods, my judgement is that both are good - just different.

Calvados has to be aged for at least two years in oak barrels before it can be sold and the older it is, the softer and more mellow it becomes. Young versions can be pretty fiery, verging on the 'rocket-fuel' category, but Calvados with a few years’ age is an extremely pleasant after dinner tipple. In France, it is often drunk at other times of the day, particularly in its home region of Normandy and 'café calva' is regularly ordered in the brasseries and bistros of the area. The age may be variously described on the bottle, in terms of number of years such as 8 or 12, or as a designation such as VSOP or Hors d'Age, the latter being a minimum of 6 years old, but often much more than that.

Apart from a warming drink with your coffee or an after dinner 'digestif', Calvados is also great in cooking. I managed to get through a substantial part of a bottle over the Christmastime, not drinking it, but adding it to the mincemeat, feeding the Christmas cake with it, or flavouring various foods such as stuffing or creamy desserts. But one of the best combinations has to be Calvados - preferably Hors d'Age - with apple pie. Add a little into the apple mixture before baking, then serve a slice with a generous helping of whipped cream and a little glass of the apple brandy by the side and you will be instantly transported to the green, rolling hills of Normandy.