The Golden Hills of Burgundy 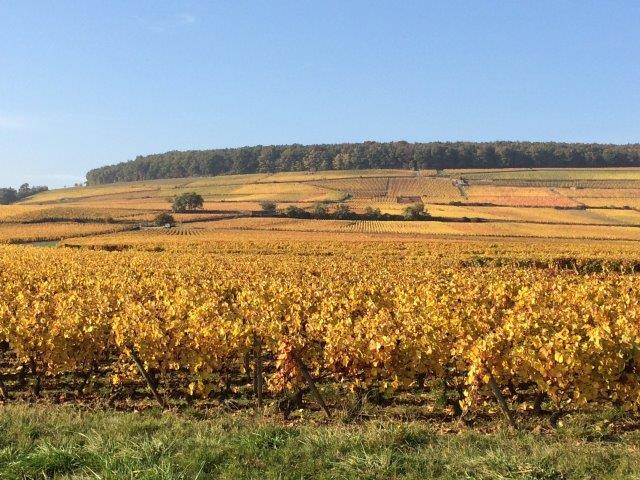 The Golden Hills of Burgundy

Last week I was visiting vineyards in Burgundy, where some of the best, and most expensive, wines of the world are made. The Central area of the Burgundian vineyards is called the 'Cote d'Or' literally translated as 'The Golden Hill'. This name may have arisen from the fact that the wines produced there are so expensive, but another theory relates to the photo of the vineyards seen below. At this time of year, the leaves of the vines turn to their Autumn colours, and the entire hillside takes on the colour of gold.

The beautiful historic town of Beaune sits in the middle of the Two parts of the Côte d'Or, with the Cote de Beaune to the south and cotes de Nuits to the north. The Cotes de Nuits is home to such wonderfully evocative names as Nuits Saint Georges, Corton and Gevrey Chambertin. The vineyard area is split into dozens of what are called 'parcels' - small, individual vineyards, each with their own characteristics, given by soil and microclimate. These vineyards are classified according to quality, with origins of this classification going back hundreds of years to when the vineyards were owned by the monks. At that time the wines were used for Communion, and perhaps it's not surprising that the churches were full.

The three levels of classification above the regional appellations are the village appellation, followed by Premier Cru and top of all being Grand Cru. My visits took me to one of the most historic wine producers in the area, Domaine Quivy. The house was built in 1710 and is located in the heart of Gevrey Chambertin. Its architecture is a perfect example of the wine estates that were typically built by the Dijon Parliament members in the 18th century. Now classified as a historical monument, the winery and cellars have been making and ageing Gevrey Chambertin wines for over 300 years, and is now under the watchful eye of Gerard Quivy. The Domaine produces all three quality levels of wine from 7 hectares of vineyards, 80% being the village appellation, with the rest in Premier Cru and Grand Cru.

As Gerard explained, although the quality of these wines has always been good, substantial improvements have been made with wines at this level, which guarantee that they are world leaders. Technical advances in recent years allow carefully controlled vinification with cold maceration prior to fermentation, whole bunch fermentation and other techniques employed to great effect. The average age of the vines is another important factor for high quality, although it has the disadvantage of lowering the yield produced. Many of the vines at Domaine Quivy are over 60 years old, with one being 100 years old.

In the elegant tasting room, I tasted the Gevrey Chambertin Premier Cru Les Corbeaux 2014. A ripe, fruity style of wine with typical raspberry fruit from the young Pinot Noir, the wine exudes elegance, style and charm. Perhaps the name should be Gevrey Charm-bertin! At 55 euros per bottle, this is a very special wine, although the Grand Cru is even more exceptional at 150 euros per bottle. 75-% of the production is exported, with the USA and Hong Kong being the main markets. Domaine Quivy is, however, available in the UK through the top London wine merchants Berry Brothers. Definitely worth seeking out for those special occasions.